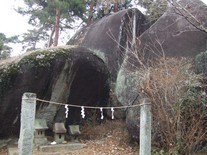 Ooishi Shrine was built on Mt. Ooishi. The granite in the shrine which is 12m high and 67m around is the largest sacred stone in Yamanashi Prefecture. It is one of 12 large and sacred stones in Yamanashi. 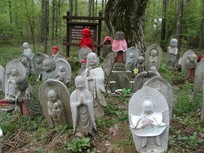 There are many small fertility buddhas (Kosazuke Jizou) around the entrance of Yakiyama Pass to Mt.Konara. The origin of 'Kosazuke Jizou' is derived from the belief that if a couple is experiencing difficulty getting conceiving children, by secretly taking one of those buddhas home and praying to it, they can become pregnant. If successful, they have to return the buddha back to the original location, plus an additional buddha. Therefore, the number of new buddhas is growing. 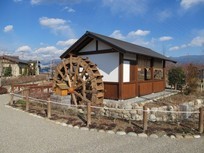 Enjoy the yellow rape blossoms blooming behind the pink blossoms of springtime along this quaint Showa Era street to the south of JR Yamanashishi Station. 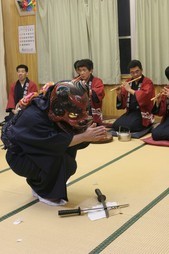 Shishimai is a ritual dance performed by people wearing lion masks while playing ohayashi, which is a traditional music made up of flutes, drums, and shamisens (traditional banjos). In the middle of January (the Lunar New Year) there is a parade of Shishimai and Ohayashi. The Shishimai Dance is performed in front of the guardian deity for travellers. On that night, four different dances are performed, and they attract a large crowd of spectators. The ‘sword dance’ is especially popular because if you are touched with the sword, the rest of the year will be devoid of illness and trouble. 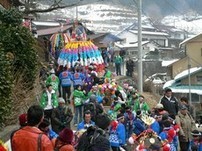 This is a parade with floats decorated with paper flowers, lanterns, and a portable shrine carried by a ohayashi band of bells and drums. The festival is usually held on the Sunday nearest Janurary 25th. Fifth and sixth graders in elementary school are responsible for making the festival floats, and they start collecting money on January 25th to make them. It is very nice to see the floats all assembled at Kichijoji Temple on the day of the festival. This is one of the most traditional events conducted by many different generations.

There is a giant waraji in Hayabusa, which is 3 meters long and 1.5 meters wide. The ancient legend states that long ago, there was a plague in this area. A priest appeared and prayed very hard for the sick until the plague was eradicated. The people wanted to thank the priest, but he left suddenly, and only his straw sandal remained. Since then people have made a big straw sandal as an offering.