Seihakuji Temple is a temple of the Rinzai school of Buddhism and is believed to be built in 1333 by the priest Muso Soseki. The calligraphy text discovered in its ceiling proved that the temple was built in 1415. The building survived a large fire in 1682. The temple is representative of the Senshuu style of architecture. You can see ‘Housangen mokoshitsuki butsuden’ in Seihakuji, which is a typical style of Senshuu architecture in the smallest size and with its colors and designs and elaborate lacquer, there is nothing like it anywhere.
During the Kamakura and Muromochi periods, there were many Zenshuu temples built by noblemen and warriors, but the trend eventually faded, so there are few examples of the ancient Senshu architecture left nowadays. Because of this reason, Seihakuji Temple is highly valued. 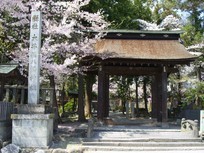 This venerable shrine with over a thousand years of history was built in 859 and has been revered by numerous warriors over the years. Nobutora Takeda and his son Shingen Takeda, who ruled the Yamanashi region during the feudal era, had a great reverence for this shrine, and it played an important role in their careers. The gateway, which is the oldest wooden gateway in Japan, was given by Nobutora during his declining years. Moreover, Shingen had the main building covered with gold plate during the Kawanakajima War. 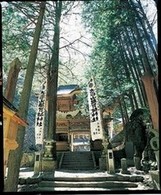 Three pagan gods:Oyamatsuminokami, Oikazuchinokami and Takaokaminokami are deified in this shrine. According to the legend, Prince Yamatotakeru no Mikoto (72-113), upon receiving orders from the gods, decided to go on an adventure to explore and conquer the east side of Japan. In order to show gratitude to the gods, he donated his sword in a rock cave. This cave became the rear building of Daitakesan Nagato Shrine. 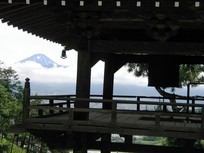 Nobumasa Takeda established this temple, and he is interred here. The bronze bell preserved in the building was reportedly used during wartime by Katsuyori Takeda, which is said to be one of 5 famous bells of the Kai region. 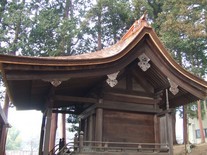 Built in the era of the 12th Emperor, Keikou Tenno (60-130), this is a Shinto shrine on Buddhist temple grounds dedicated to the guardian deity of the area. It has an asymmetric curved-shaped roof, covered with hinoki tree barks and is surrounded by magnificent columns.